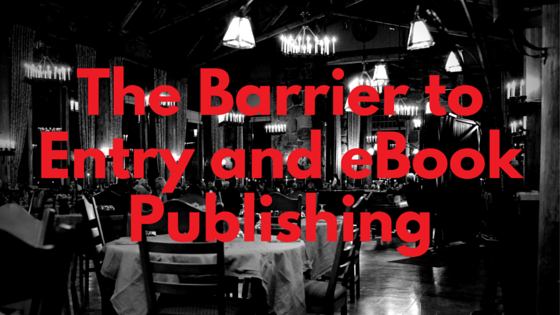 I just want to talk today about why I think the barrier to entry is both the best and worst reason to get into eBook publishing as a business to make money online.

The biggest reason I think the best is because anybody with a laptop and an internet connection can publish a book online. There’s no extra software you need. I’ve done all my formatting in Google drive which is a free service and when I made covers before I started outsourcing I used GIMP which is a free photo editing software.

There’s also no inventory because it’s all digital. There’s nothing to worry about as far as keeping up with mailing and the post office and whatnot so it’s very easy to write a book, design a cover and publish it. Whether it’s on the Kindle platform, Kobo, Google Play store, iTunes store, Barnes & Noble Nook store, they’re all very easy to get into and there’s no fee for any of them.

Unfortunately, that’s also why it is the worst. The barrier to entry is low because anybody can do it. People learned that a long time ago so anybody starting tomorrow is going to have to deal with this competition.

There are people doing 10 books a week, 20 books a week. At one point time, I had 10 now freelance writers working for me and they were all producing a book week so as 40 books a month easy.

Not only that, but there is so much software out that if you don’t pay any money to start (which is completely fine, it’s not a requirement at all) you won’t have any type of edge over the next guy.

You might be one of those people that publish a book and say self-publishing is dead because your marketing sucks.

There is keyword searching software, they have stuff that will analyze your blurb to see it in the rank well.

There’s so much more going on besides just write a book, make a cover, and hit publish.

The learning curve is not very steep, but after you realize what’s going on in there’s a lot to learn.

Another thing is that the market is ever-changing as far as what people are actually trying to look for and buy. A while ago it was all about paleo cookbooks and whatnot. I hear the next big thing that people are doing is adult coloring books so if you’re in it to actually make money you’re going to want to follow the market.

There is a lot of research that goes along with that. I know when I first started in self-publishing my first my first book was short fiction story. My second one was a joke book for kids. I actually wrote three or four because I thought they were such great idea. I have a couple how-to books and I didn’t know what I was doing, this was last year, last March is when I started, and they didn’t sell.

Luckily I stuck with it after I wrote a couple books.

I hired ghostwriters. Even when I started nonfiction later last year I didn’t try to follow any of the trends. Sales were coming, but they weren’t the best. I got a return on my investment and a little bit of pocket change.

If you don’t follow the market, if you’re trying to make money with this, you’ll want to follow the market and write what’s popular. If you try to write for the love of writing then go ahead, keep doing you.

If you try to make money from this, you got to follow trends because that’s just that’s how the market works.You don’t sell what you think people want, you sell what people want and the market dictates that: you can tell by rankings and what’s on the best sellers list.

So keep this in mind if you want to get into self-publishing as a business.