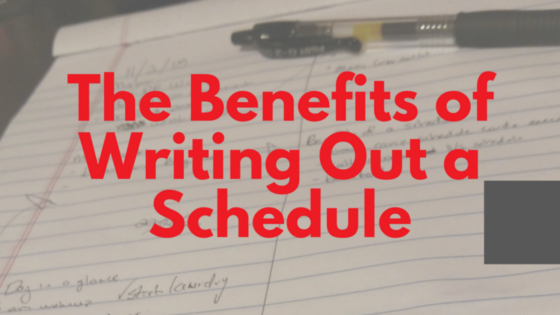 It’s day 2 into #NoNothingNovember, and I’m already seeing the benefits of writing out a schedule. What’s the point of waking up at 5 AM if there’s nothing to accomplish?

Anyone that’s been in the military knows how boring and tedious the first few weeks of boot camp are. You’re not used to being told what to do and when to do it every second of every day. What you don’t realize is that every single step of every single day, with a small exception on Sundays, is carefully planned out for maximum efficiency. This was found out with the quickness though.

In Marine Corps recruit training, there are many billets, or jobs, to hold for recruits. The guide is the leader of the platoon and is the fittest and shows the most leadership out of everyone. There are 4 squad leaders that are under the guide and each take care of 1/4 of the platoon. Outside of leadership roles, there are other jobs that need to get completed. The house mice are the 4 shortest recruits and clean up the drill instructors hut and storage locker. Then you have the scribe.

The scribe is one of the smartest guys in the platoon. He will help the drill instructors with computer tasks like data entry, will make the fire watch schedule, and conduct weekly weigh-ins. The scribe gets hooked up with a lot of information that a lot of other recruits don’t get to see … unless the scribe hooks them up and shows them.

One of the tasks our scribe was assigned was copying and laminating the daily training schedule. This gave him the entire week at a glance, every half hour planned out on paper.

And he shared it with us.

The uncertainty of the next day was gone. We knew it all. When PT was. When we were going to the classroom to learn some history. The days suddenly felt shorter, there was no element of surprise.

That’s how I feel when I have a schedule made. I wake up in the morning and can look at my cheap legal pad journal and see what I need to get done. I have my tasks at the top left, up to three major tasks and as many minor tasks as I want. Any minor tasks that aren’t accomplished are rolled over to the next day.

On the bottom left was my day at a glance. I had my whole day planned out hour by hour, but found that being flexible is a whole lot easier. For instance, I planned to shower after doing my daily pushups, situps, and squats. Unfortunately, I planned to start my laundry right before that and threw in all my towels as well.

For now on, I’ll merely put which tasks I want to do before lunch, in the afternoon, and in the evening.

On the entire right side of my page is an ideas column. I put steps for the tasks I have to do and brainstorm new ideas.