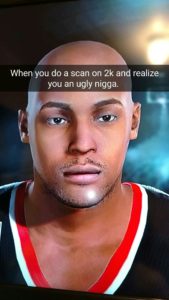 So for the first time in a month, I hopped on the ol’ PS4 and one of the free games of the month was [easyazon_link identifier=”B00XWE54CU” locale=”US” tag=”onyxdefiant-20″]NBA 2k16[/easyazon_link]. As a sidenote, I don’t watch basketball and don’t know the dynamics of basketball. I have no idea what I’m doing in the game.

The only thing I know is that when it prompted me to create a character or whatever, I could scan my face with the ol’ [easyazon_link identifier=”B00O9JLAX4″ locale=”US” tag=”onyxdefiant-20″]PS4[/easyazon_link] camera. Check the image I put on the ol’ Snapchat.

I thought it was pretty funny, and I can’t be too mad at the accuracy of the scan. So I decided to put myself on blast and say hey, I’m ugly.

If you can’t laugh at yourself, then how can you laugh at anybody else? I think people see the human side of you when you do that.

Well as it turns out, I have a sensitive person following me on the ol’ Snapchat.  She hits me with a message to the tune of “why are you being mean to yourself?”

Because I’m not being mean to myself. I’m being myself. Anyone that knows me knows that I poke fun of anything I can, including myself. We go back and forth for a few exchanges before I stopped replying.

I woke up this morning a little bit before my alarm goes off. No big deal, not enough time to go back to sleep and not enough gumption to get up. What’s there to do?

Roll my ass over and get on the ol’ Twitter from my phone and scroll through those late night mischief tweets. Shit goes down on Tuesday nights. Ask that doughy panda looking rapper.

I’m scrolling, laughing at tweets from @nero and whatnot, when I come across a tweet from none other than the anti-fun woman from last night. I’m not going to put her stuff out there, but, sure enough, there was a tweet from her doing some crying laughing emoji in response to someone’s tweet.

Hypocrite? Maybe. Is it that big of a deal? No. But it’s fun to write about dumb and simple shit like that.

I’ll leave you with the last message she sent to me last night before I noped the fuck outta that circular conversation.

Why so we have to make fun of anything? You can be amused and find random things funny. In order to laugh, we don’t have to make jokes of one another

It makes it so much easier, though.