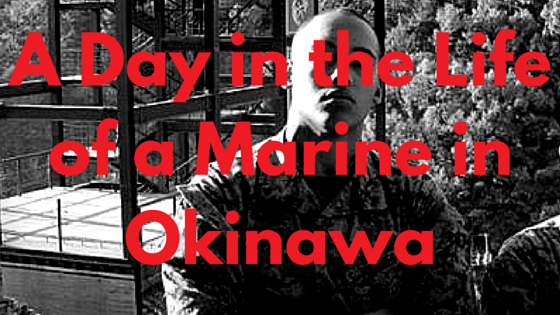 I want to start off wishing a juicy happy birthday to all my fellow Marine Corps veterans, and those still on active duty and get(or are getting told) to dress in their blues this week. I also want to give a shout-out to those veterans who can still fit in your blues. 240 years of Marine Corps things.

The Marine Corps contained, many times simultaneously, the best and worst times of my life. Going to different countries I never thought I wanted to go to was always great. Working long hours, sometimes in excess of 36 hours in a row, was not always the most fun.

All in all, I wouldn’t have changed it for anything (because I can’t).

Okinawa is a breed of its own, especially compared to any stateside base. When you work, live, and play with the same group of people for two solid ass years, you make some incredible friendships. I left Okinawa in May 2012 and still talk to one of the guys I was stationed there with every other week.

I have no doubt in my mind that if I was in another state, I could easily call up a guy I was stationed with and have either a place to stay for the evening or an old friend to enjoy the city with.

What does a normal day look like while stationed in Okinawa?

Wake up at 5 in the morning. Go outside in PT gear for a platoon accountability formation. Run for a few miles, do some calisthenics, or hit the gym. Maybe even a combination of both.

Go to chow. Nearly every chow hall in Okinawa is operated by Marines, so the food and service is a whole lot better than the Sodexo nonsense everywhere else. Omelets every morning for breakfast, or grab a bag nasty (to go bag) which is never a bad choice either.

Be at work by 8. Start the day off with another formation, mostly informal and this time in whatever shop you’re in. Used partially for accountability, but mostly to pass the word on what needs to be done for the day and who’s working on what.

Work your ass off until chow at 11, 12 or lunch break. Afternoon chow is a luxury. On the rare occasion, you’ll be able to actually leave for chow for an hour, and even more rare for a pair of hours. Most of the time, especially working up to an exercise, one or two people will grab meal cards from every Marine and grab bag nasties for everyone.

Work until 4:30. Evening formation. The work day is “over”. It is never over at this time. A lot of word is passed on, and most of the time the job isn’t finished for the day so it’s back to work.

After work. Get more chow. Play Call of Duty or drink until you pass out. Prepare to repeat.

That’s a small sample of what a “normal” day is like in Okinawa. Unfortunately, those come far and few between. Long hours at the shop can be attributed to staff NCOs not having a life outside of the Marine Corps, so they try to stay working as long as possible. Thus is life in Okinawa.

What about the states?

When I got to North Carolina after spending two years in Okinawa, I had an incredibly lax schedule. I picked up Sergeant shortly around 9 months after I got there and got out of the Marine Corps less than a year later. I was the senior Marine in my shop, so was on my own fucking program.

It was probably the easiest thing I did the entire time I was in. I had more free time then when I was home on leave. After realizing how damn easy my life was going to be, I took full advantage. Started seriously getting into working out and gained around 45lbs in a year, and only added 2 inches to my waist. Going from 6’4 210 to 6’4 260 created a monster.

Then I EAS’d and stopped lifting so much.