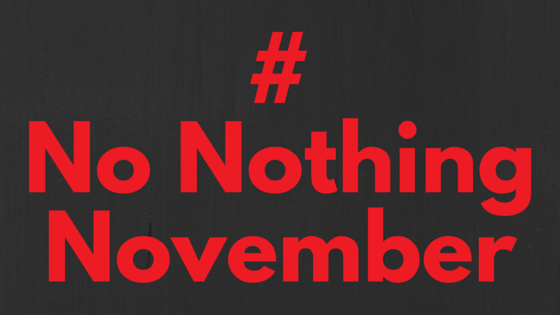 So here we are, the first week of #NoNothingNovember completely over. Thus far, it’s gone pretty well. I did have some hiccups, but it’s expected in something like this. I can deal with it, though. Just have to roll with the punches, adapt and overcome.

To recap, the 3 things I gave up are:

And the 3 things I added in

Let’s break them down now, starting with the vices.

Excessive drinking. So far this has been the easiest to do. Since the first of November was a Sunday, I didn’t have to worry about this one until this last weekend. Friday night I didn’t even go out, so that was the easiest way to manage.

Saturday I decided to go out of town to visit my best friend to talk about the blog and eat dinner. 2 Sam Adam’s and a few hours later I drove home. Turns out my roommates decided to throw a house party, but when you arrive at 11:30 at night to a humid house full of sweaty bodies the last thing you want to do is join them, so I took a beer and left. Went for a midnight cup of coffee with a friend, and she ended up giving me a Fireball bottle opener.

The Internet. Seems a bit harder than the previous vice. I’m going to download one of those cold turkey internet blocking plugins so I can block all my favorite time wasting cesspools for certain hours of the day. RIP in piece Reddit.

$50 fuck-it budget. I need to reevaluate what exactly I include in this. At first it was alcohol and cigarettes. Since I haven’t bought cigarettes all week, I may have to include clothing purchases and other not-exactly-necessary purchases. My stick to cash for all out-of-the-ordinary transactions.

For example, when I visited my friend on Saturday. I needed to buy dinner, but does that come from that $50, or not. We’ll see come this week.

And now the positive additions.

5 AM wake up. This is easy as pie when I’m at my home, at least during the week. With the weekend festivities, I couldn’t include this on Saturday or Sunday (especially since Sunday I stayed up until 5 “drinking coffee”). On Saturday, I did wake up at 7, without an alarm which allowed me to do so much more than a normal Saturday.

Daily 100. Damn, it feels good seeing progress every day. At the beginning of the week, I could barely knock out 20 pushups in a row, by Friday I was banging out over 40 consecutive with gusto. I really want to get up to 100 with no pause, and when I do I’ll keep going.

Limiting food to meals. It’s very easy to only eat when you plan on it when you don’t have snacks laying around. That’s probably the easiest way to not eat excessively out of boredom. Couple that with eating massive meals at the appropriate time creates an environment that breeds success.

Writing the next day’s plan. This is massively helpful, especially with waking up at 5 AM. At first I planned out damn near every hour of my day before classes. I saw the error in my ways on day one when I started laundry before I did my daily 100, and all my towels were in the dryer so I couldn’t shower. Adapt and overcome.

Now I take my legal pad and draw a line down the middle. On the left side is a list of tasks I need to accomplish, with one to three major tasks and many minor tasks that can roll over if they aren’t accomplished. On the right side is any idea I come up with throughout the day which become tasks for the future.

Adding 1 blog post per day. I did well through the week but come the weekend it didn’t go so well. Adjustment? Make up for it later. 30 total blog posts in the month can be done a number of ways.

As with any major changes in life, adjustments need to be made to accommodate and accomplish. Something done in the morning might need to be done at night some days. That’s how life works. Recognize the end goal and get to it no matter what, whether it was the way planned or a way created along the way.

I feel like I’m still on track to do this.

It’s never too late to make changes in your life. It may be late to hop on the #NoNothingNovember train, but there’s nothing stopping you from joining the #NoBullshitAnymore train.