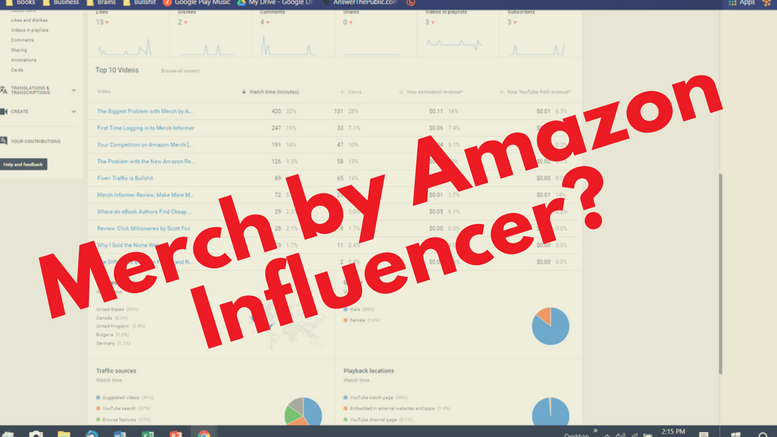 Who thought it would be as easy as putting out a video basically bashing the platform and getting a few hundred views in a few days?

And for what? In the video, found here, I talk about how it’s not a real business and the shirts suck and all this other stuff. Hell, at the time of this writing there are about 900 views, 5 likes and 12 dislikes on the video.

I guess that speaks volumes about the impact one video can have.

Over 37 hours of people watching me ramble incoherently from one six-minute video.

I don’t remember exactly why I made that video. If my memory serves correct, there might have been some sort of update that people were buttfrustrated about and it was my video that caught on before others.

One of the commenters on the initial video decided to take it upon himself to talk some shit. Fortunately for him, I figured out his Merch account and did a case study on your Merch by Amazon competition.

Note: he’s not much competition.

That garnered another 400 or so views so far, putting me further up on the YouTube hierarchy of people talking about Merch.

The thing is, there aren’t that many people that are talking about it. So my two videos are 200 times better than people that have ten videos with 20 views each.

One of the best things about this is I’m not even on the first page when people search “Merch by Amazon”. My first video shows up on page four! (This was found by going incognito and searching.)

As much as I don’t want to, I feel like now it’s time to take advantage of the game and play it. So with that being said, I’m not going to go the scumbag route and copy other people’s shirts.

I’m going to keep putting out stuff I want. Every other day, until I max out my designs.