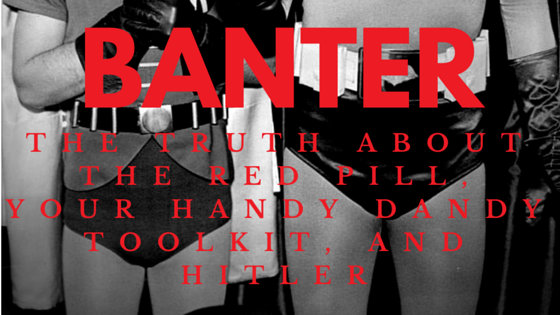 I’m not a firm believer in The Red Pill, but followers of The Red Pill are not all that bad. The Red Pill will be referred as TRP for now on. No, I’m not talking about the documentary, either.

If you don’t know what TRP is, don’t look it up. Or do, I don’t care. The easiest way to describe it is a large group of dudes on the internet who are into self-improvement and the whole pick-up game thing. They don’t like the pussification of America and how feminists are taking over…or something like that.

That’s just the thing, a lot of what they say can be beneficial to a majority of people, but there are those other factors that turn them into this negative monster that SJW’s love to hate.

Hitler was a bad person, but he was pretty damn charismatic and had great leadership skills.

No matter how bad something is, there are some inherent good qualities that can’t be masked by those bad qualities.

Take for instance the NoNothingNovember challenge. It’s essentially a way to improve yourself with a solid support system in thirty days. I’ve been doing my daily 100 and have this cute little vein popping out the inside of my arm I haven’t seen in years. Welcome back, little guy. Would I have considered starting something like that before? Probably not, calisthenics isn’t my thing. But they might become my thing.

Some of the shit they post is pretty funny, as well. Like when they link to people describing their shitty 4-year relationship, and you can’t help but laugh at the guy for being such a gimp.

Honestly, you can’t find a bit of humor in this post?

They preach about starting hobbies, lifting weights, and to not chase the pussy. What could possibly be wrong about that?

Well…I guess there are some negatives. They really like to talk about how all women are the same. I’m also not into the whole pick-up game thing either. Not exactly my thang.

That’s where the handy dandy tool kit comes into play. That’s your 1967 Batman utility belt that contains bits and pieces of things you want to use when the time comes to use it.

I don’t mindlessly adopt ideas and actions because they’re recommended by a resource I use. That’s how cults are formed. You need to choose the actions that will benefit you the most, put those actions in your tool belt, and use them later. Everything else you can disregard.

Take, for instance, Mr. Adolf Hitler. It’s generally agreed on that he wasn’t the best person in the world, and the things he did were bad. But, you can always take from him his leadership abilities and charisma. Dude knew how to chatter, can’t take that away from him.

Unfortunately for some people, they mix up the two and turn into giant assholes.