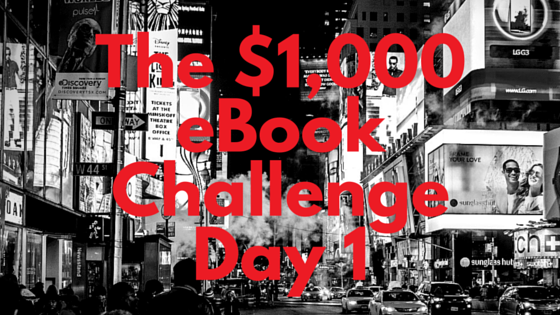 Here’s what I managed to muster up in between free meals for Veteran’s Day:

I picked out a snazzy pen name that will work well with the subject of the eBooks. It is a variation of the scientific name for a sunflower, so clever. There were no people using the name in either real life or online, so of course, the domain was not taken.

I setup a new gmail account and Mailchimp list for the new pen name. Migrated the domain name to my Hostgator hosting account as well. That’s a virtual $10 taken off.

I talked to one of the people that have written for me in the past and got a great response. He’s going to produce a three-part series of 8,000 to 10,000-word books for $85 per book. That is a great rate, as his writing is exceptional.

The first story will be completed on the 20th of November, and I will consider the real day one to be that following Monday, the 23rd of November.

I’m having him write fiction, and will release more details once the eBook challenge is over.

The projected game plan so far is to wait until the 20th to receive the final product, edit it using Grammarly, actually read the content to make sure it’s not bogus and get ready for cover creation. Between now and the 20th I’ll look up a million ways to do advertising.

It’s about to get yucky.