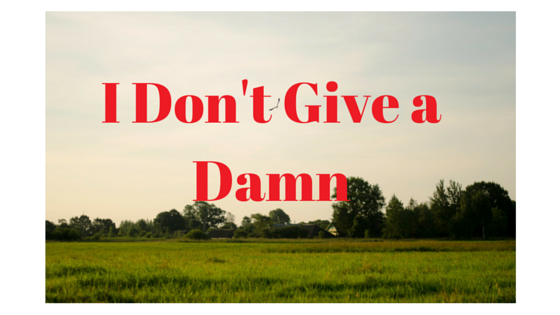 Had a heated debate with the girlfriend the other day and she said that one of my biggest faults is that “I don’t give a damn about anything“. Now at first I was thrown off by this comment but, I realized she hit it right on the nose. Now before you go thinking I’m some narcissistic ass(not totally wrong) think about the things you truly care about in this life.

I’m sure that doing the laundry, dishes, and other household chores are not at the top of the list. I wake up at 9am(on my day off) and my new thing is to just hop in the shower upon waking. I do this to wake up and just feel ready for the day no matter if I showered the night before. After getting out of the shower we were supposed to go to the gym and have ourselves a “couples workout”.

That’s about how far we made it to the gym also!!!

Let us take a step back here and take a look at the factors. I am 25, male, personal trainer, played sports my entire life and she thinks that I’m going to wake up and “want” to clean. What in the sam hell is that? Why on anything sane would I want to clean over going to the gym?

Simple, I don’t give a damn about cleaning!!!

I care about family, friends, lifting, food, money, work, self-improvement and things that make life worth living. Not the monotonous daily tasks!! Small things in life will always be there to take care of but living in the now and present is what “I” want to do in life.

My dad always told me that I was not put on this planet to do what others wanted. I should build my own path and those that see your success and want to be a part of it, will follow. With those that stand aside and judge, “who gives a damn what they think”. Opinions from those who have never tried or are willing to try shouldn’t impact your life. There is nothing worse than those that “think” they know.

Look at the rich, you don’t see them wasting time on the things that don’t matter to them. Nice guys finish last!

We have all known that one guy who is a dick to everyone and yet has everything they want or what you want. Instead of looking at him as an ass why don’t you think of it as he doesn’t want others dictating his life.

Two weeks ago I got fired from my corporate personal training job. While I was sitting there listening to him talk all I could think about is, I don’t give a shit. At first, I was mad at myself, now I realize now that it is exactly what I wanted. Getting fired made me sit down and think what I truly wanted and what I could give a shit less about.

I have always wanted to be my own boss and now I am. You have to give the fucks to the right situations. Not giving a fuck only makes you different, not an asshole. People hate different, nine times of ten it’s because there is an aspect of your life they envy. Find your passion in life and strive to be the best and don’t give a damn about what others have to say on the way to the top. Give a damn when it is important to you and not when it is to please someone else unless it’s to make money than give about two shits so you can pay rent. Success and failure are the only two ways to look at it. Steve the random guy at the gym who said you need to eat more protein to get stronger but can’t see his pecker when he hits the urinal, who gives a damn what he has to say. This DOES NOT make you and asshole!

I spent three years training in gyms and listening to what others had to say about me, guess what. My training dropped, my sales dropped, and I hated being a trainer. Once I started to do things my way again everything started to increase again. Of course, that’s when I got fired. My clients followed me and now I get to keep the money I earn instead of having to divide up my profits. I make my own schedule and only work on the important aspects to my life.

So at the end of the day, you are right, I don’t give a damn!

Finding your true self and being able to not give a damn is a path less traveled. Passion is what should drive you. Be that difference you want to see in the world and stop giving a damn what others think about you.